It's a well known principle of software engineering that the earlier bugs can be caught, the lower the overall cost. As such, testing needs to happen at every level. Once your project is at the coding stage, the earliest form of testing is on the code itself, not on the binaries the compiler produces.

We run a variety of tools over critical codebases such as Upstart and Whoopsie regularly to identify issues well before they "escape into the wild". These tools include Coverity Scan (see the list of projects already using it).

If you really care about your code and you are involved with a C, C++ or Java project, I'd strongly encourage you to take a look at this awesome tool. If you aren't directly involved in such projects, try contacting those running them and suggesting they use Coverity.

The Coverity Scan service is entirely free for OSS projects. You will need to register to obtain an account and then download the client analysis tool. Once setup, a particularly attractive feature is the ability to auto-upload the analysis data generated for your project using ESR's coverity-submit tool. This could for example be hooked into your upload or release process to ensure no code quality regressions. After you have uploaded the analysis data, you can browse through the results of the scan using the web interface in a variety of ways, including a view that shows the errors "inline" with markers added around the code Coverity has identified as problematic.

For those who have either never used static analysis tools, or have simply never used Coverity, don't fall into the trap of thinking that gcc -pedantic -Wall or even LLVM's scan-build should be "good enough for anyone" - it simply is not. Consider too Steckel's Rule to Success,

Coverity performs very deep analysis and its results may well surprise you... but rather that than unexpected surprises for your users.

Apologies if this post sounds like a bit of a sales pitch. It really isn't though: the Coverity service is free and what they are offering really is too good to ignore. 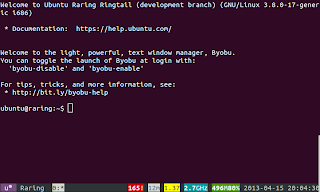 Introduction In these heady times of almost daily advances in UI pizzazz, you could be forgiven for thinking the terminal is somewhat of a dead-zone when it comes to excitement. Oh how wrong you would be though...! If you've never used  Byobu ,  Dustin's  awesome text-based window manage, sudo apt-get install it without delay to be bathed in pure terminal goodness. As shown below, byobu comes with a whole host of standard indicators, allowing the display of useful snippets of information. The indicators are minimal out of terminal-width real estate necessity, but that's also their strength - they provide just the details you really care about in a tight ASCII format. And they're cute of course :-) However, byobu has a well-kept secret: when running with the tmux backend, it supports Unicode indicators. So with the proviso that you are running " byobu-tmux " rather than " byobu-screen ", you can squeeze down those indicators even further
Read more

May 28, 2021
I’ve just released the rout tool I mentioned in my last blog post about command-line parsing semantics . rout is a simple tool, written in rust, that produces unicode utf-8 output in interesting ways. It uses the minimal command-line parsing crate ap . It also uses a fancy pest parser for interpreting escape sequences and range syntax. Either grab the source , or install the crate : $ cargo install rout Full details (with lots of examples! ;) are on both sites: https://crates.io/crates/rout https://github.com/jamesodhunt/rout
Read more